How to Write a Script on Google Docs

If you want to work in the film industry, you must understand how to write a screenplay. There are several software programs you can download to help in this process, but they have limitations.

You can learn how to write a script on Google Docs by formatting specific elements of your document. You can adjust the font, margins, stylization, indents, and spacing. Learn how to build a screenplay in Google Docs in the step-by-step guide below.

What is a Screenplay Format?

You have to know the standard format of a screenplay before learning how to write a script on Google Docs. It includes the elements and style you need for commercials, films, and other videos.

The script format Google Docs does not include massive blocks of text. Every page equates to one minute of film time. Your script has to match the length of your video.

Try to keep your script format in Google Docs clean and professional. You want it to be readable. Actors have to understand what you require, and producers need to know what to film.

The content elements of your script help organize the document. They help readers understand who has dialogue and the actions taking place. Some of the most common elements are in the list below.

The fade-in is the beginning of every script. It will cover when the action begins in your story.

The scene heading describes each location used in your script. The portions of this element are below.

Subheaders give more specific information for the same scene under a heading. They are beneficial when describing a later action or room change.

Action lines describe the happenings of a scene. You can help readers visualize a character, understand the location better, or know more about the actions someone takes.

You have to show a speaking character when they have dialogue. Put the name in all caps in the middle of the document.

You will place dialogue under the character’s name. It should have standard capitalization and should follow typical grammar rules.

A parenthetical instructs the reader about how to consume the information. The most popular options include O.S. for off-screen dialogue and V.O. for voiceovers.

Shots are the least common elements in a screenplay. Writers indicate these features if the type of shot is critical.

If there is a montage in your film, there are specific steps you must follow.

Lyrics are rare in screenplays. Writers typically share the emotions of the song rather than the words.

Chyrons are words that appear throughout the film. You will write “CHYRON” to introduce those titles.

Finally, the last element used in your screenplay is the fade-out. It goes immediately after the final action line.

On-Page Style of the Script

There are specific on-screen styling cues you should meet when building a film or TV script template Google Docs. Read the list below to learn how to set up your screenplay. 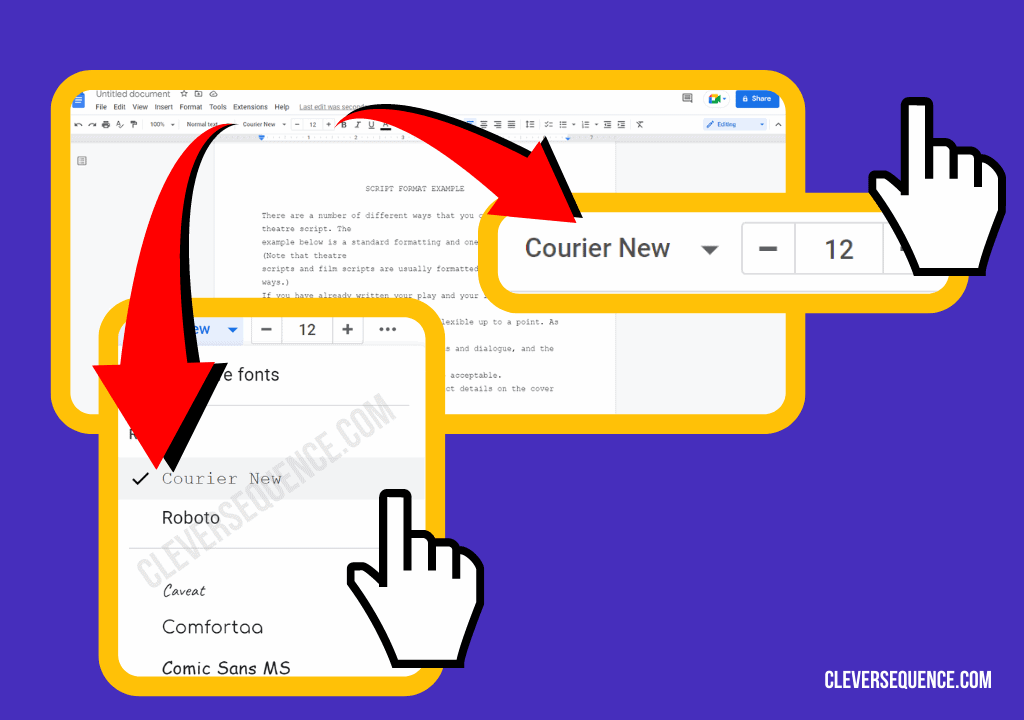 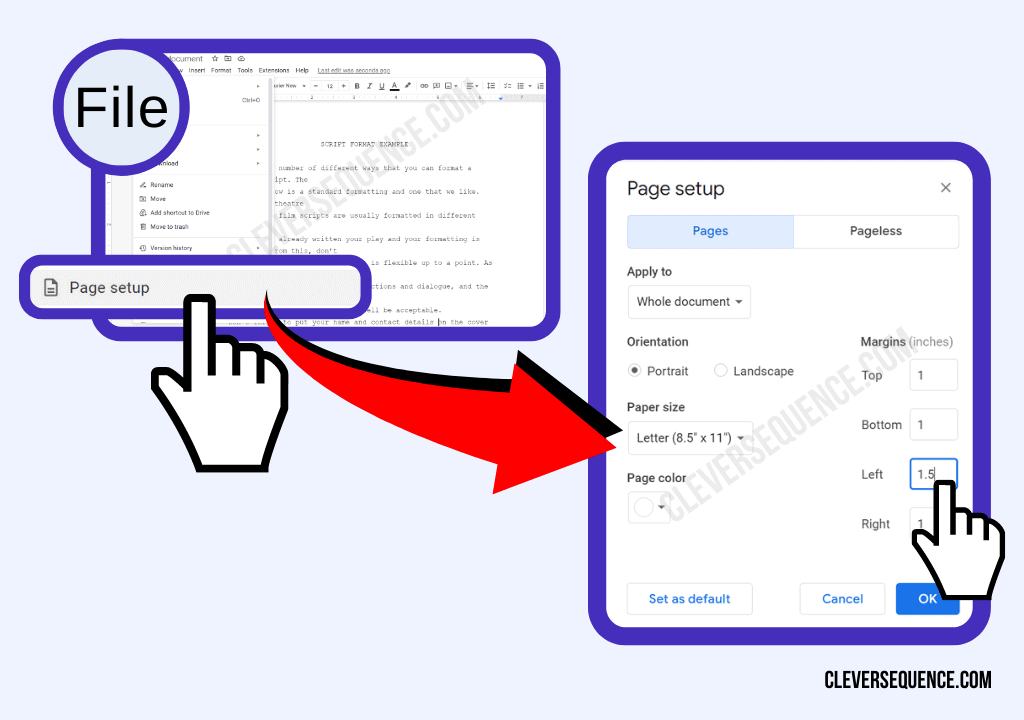 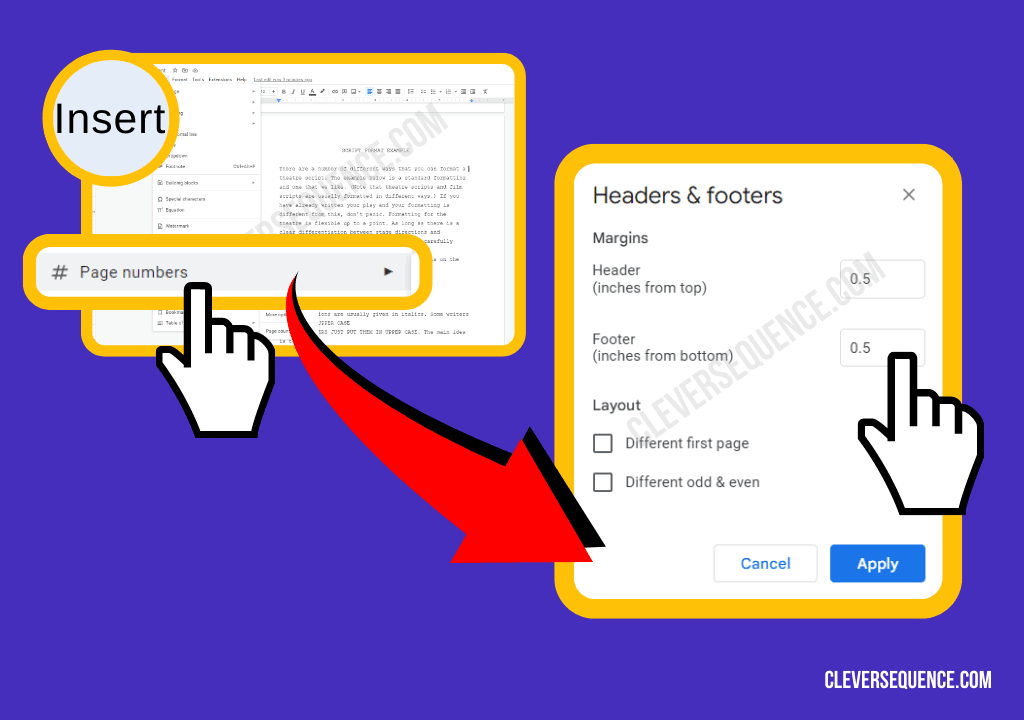 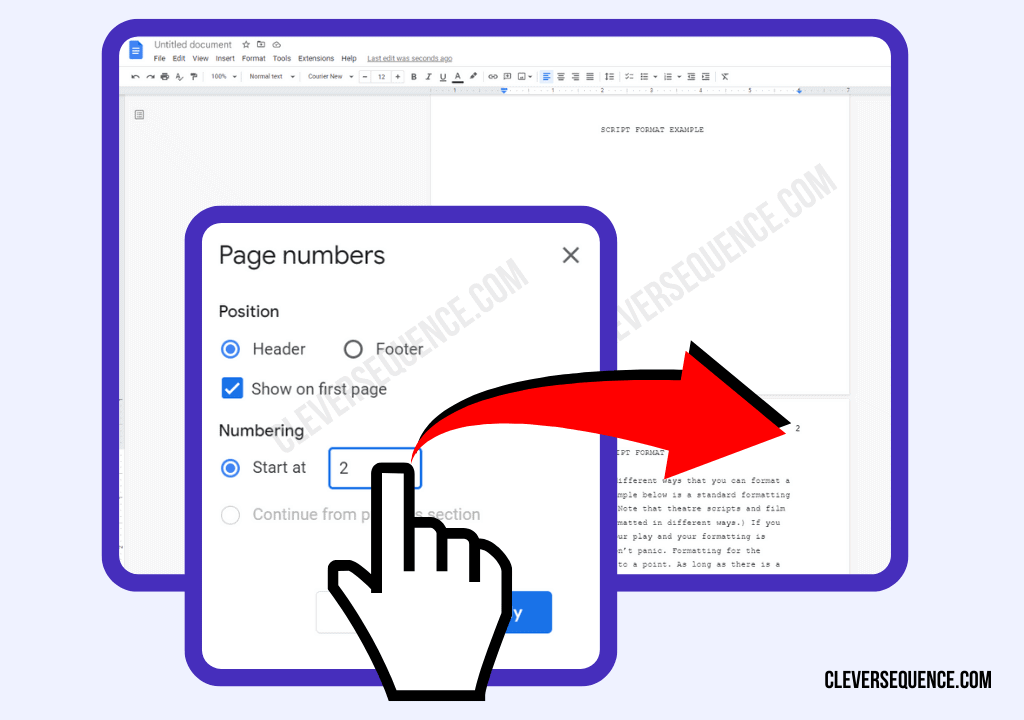 How to Format a Screenplay in Google Docs

This step-by-step guide will help you learn how to write a script on Google Docs. This program has several features you can use to effectively set up your screenplay.

First you need to start a blank document, as shown in the steps below.

You have to set up your page margins when first learning how to write a script on Google Docs. On the left, there should be a 1.5-inch margin. The spacing should be about an inch on the three other sides.

You can learn to set up these margins with the step-by-step instructions below. 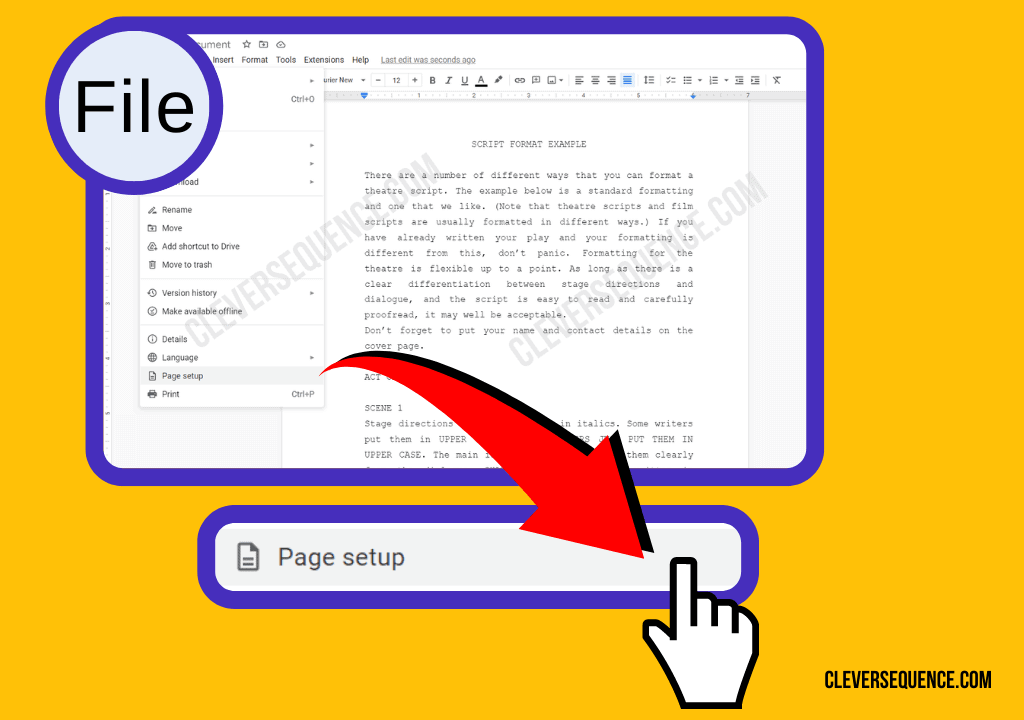 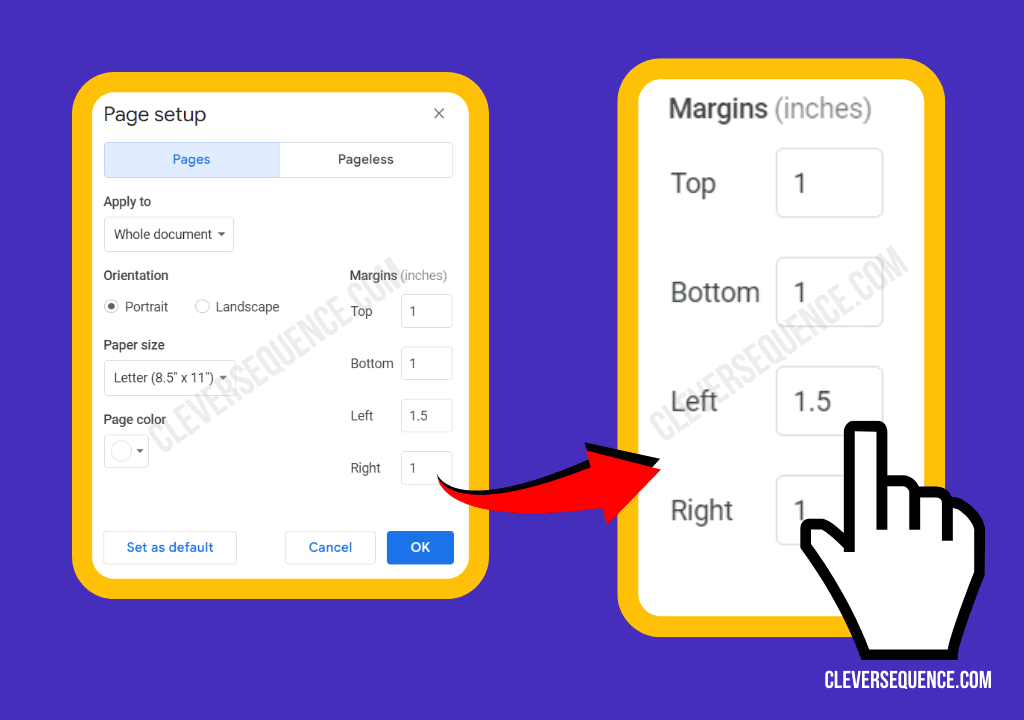 You also need to change the font size when learning how to format a screenplay in Google Docs. Your text needs to be Courier at 12 points. There are buttons in the toolbar to change your font stylization. 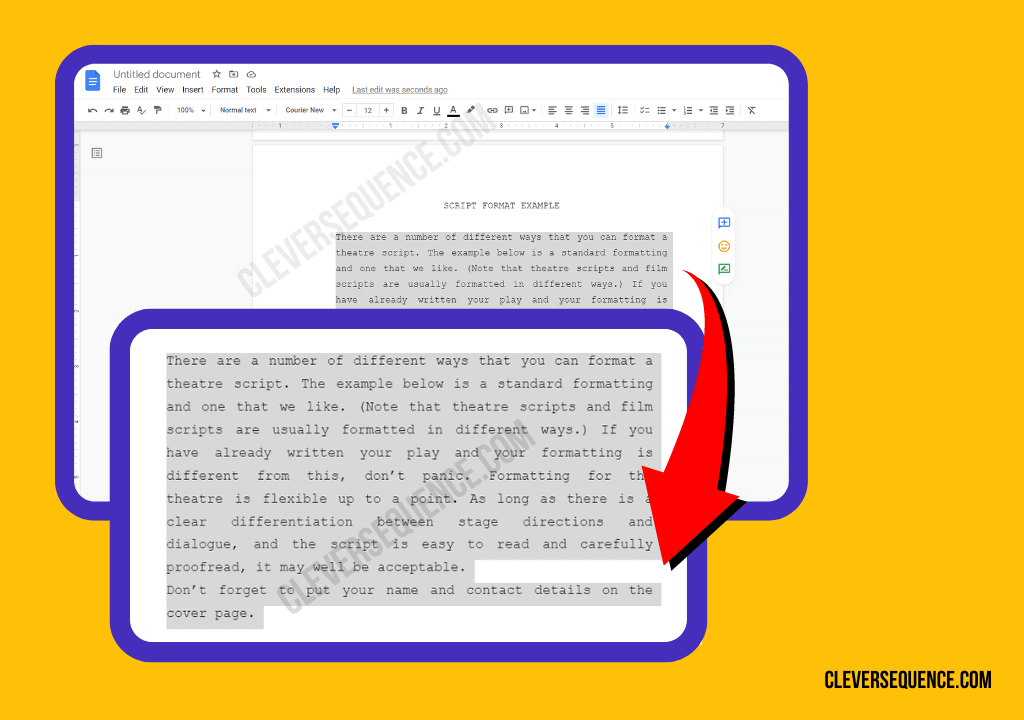 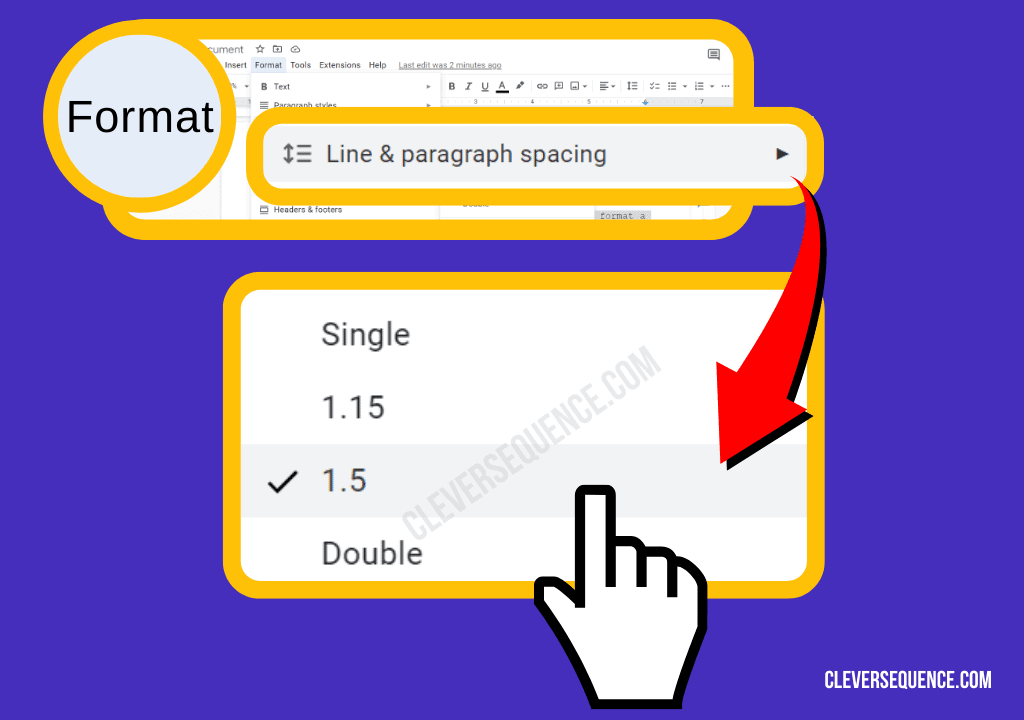 Some portions of your screenplay should have specific alignments and indentations. Dialogue and speaking character titles need to be in the center. You can align these elements with the below steps. 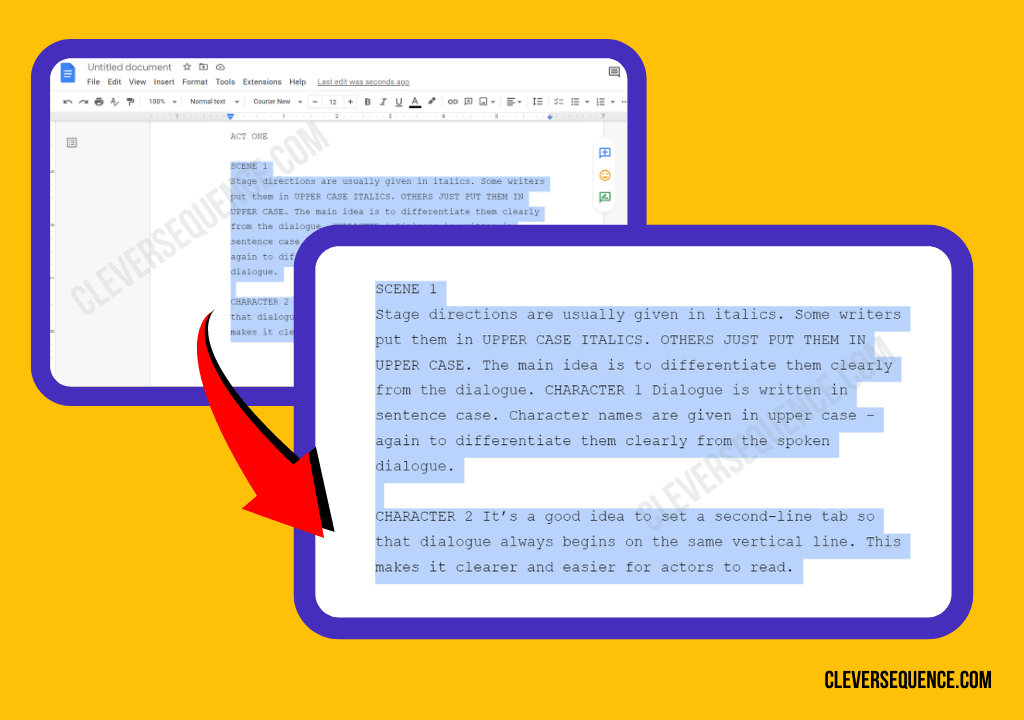 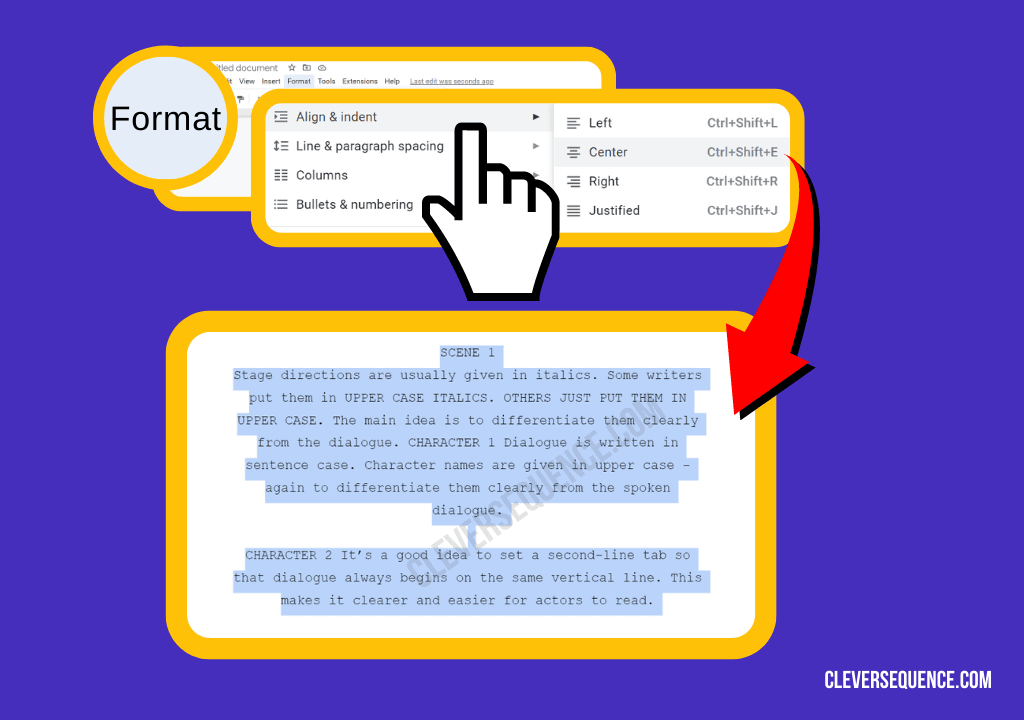 You can use a couple of examples when making changes to the alignment and indentation. Center your title horizontally and take it a third of the way down the first page. Dialogue, as mentioned, should be in the center and indented 1.0 inches away from the left side of the page.

You can format your text in several methods in Google Docs. You can italicize, bold, change the font, and adjust the size of the words in your document. You can click on “Format,” followed by “Text,” to make those changes.

You Might Also Like: How to Make a Table of Contents in Google Docs With Page Numbers

You have to add page numbers when you learn how to write a script on Google Docs. They will go in the top right corner. The first sheet will not have a page number on it.

Learn how to add page numbers to your script outline template Google Docs with the below steps. 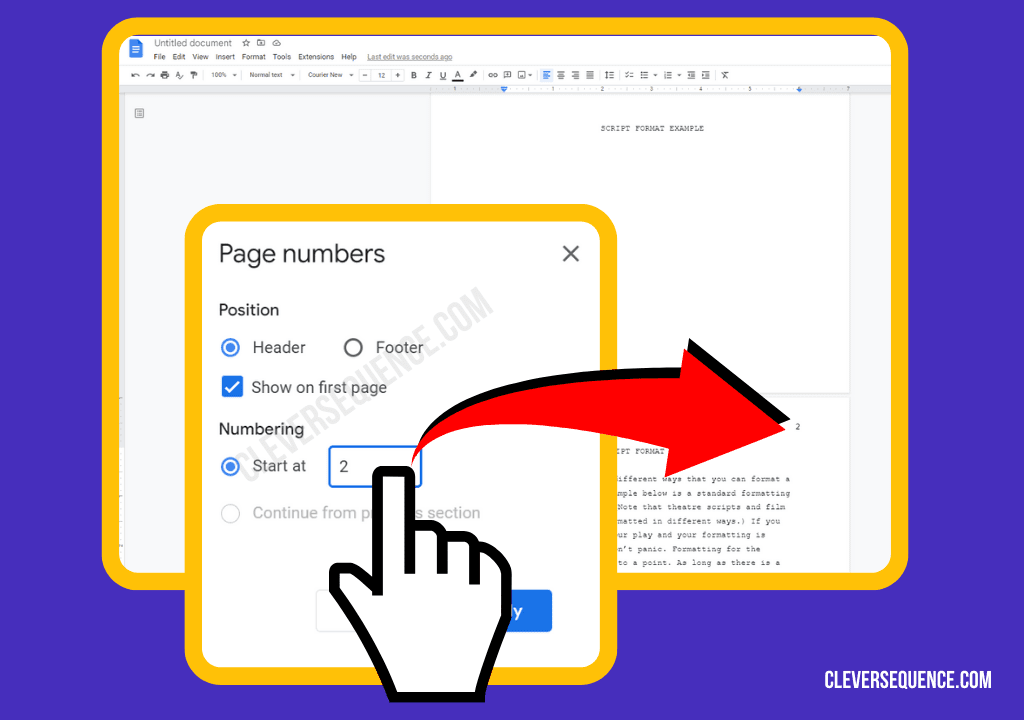 You may wonder if you can find a screenplay template in Google Docs to make setup easier. Unfortunately, there is no built-in option on the software.

You can always follow the above steps to learn how to write a script on Google Docs. Several templates are available for you to use in combination to create your screenplay.

Use a Combination of Several Different Templates

You can use each script outline template in Google Docs below to build your screenplay. 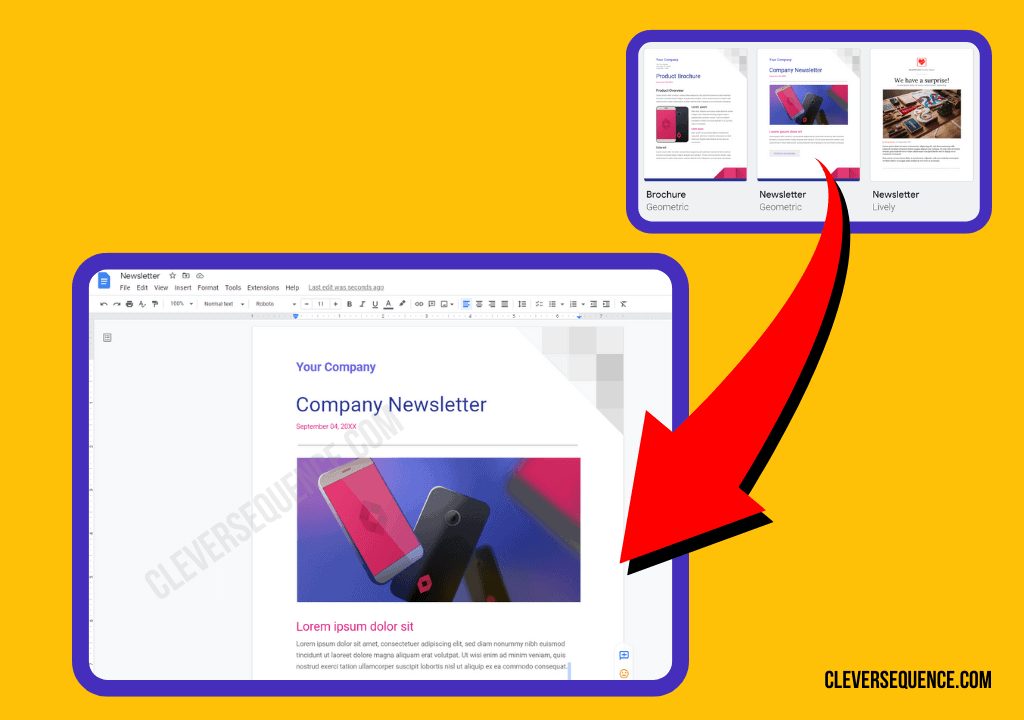 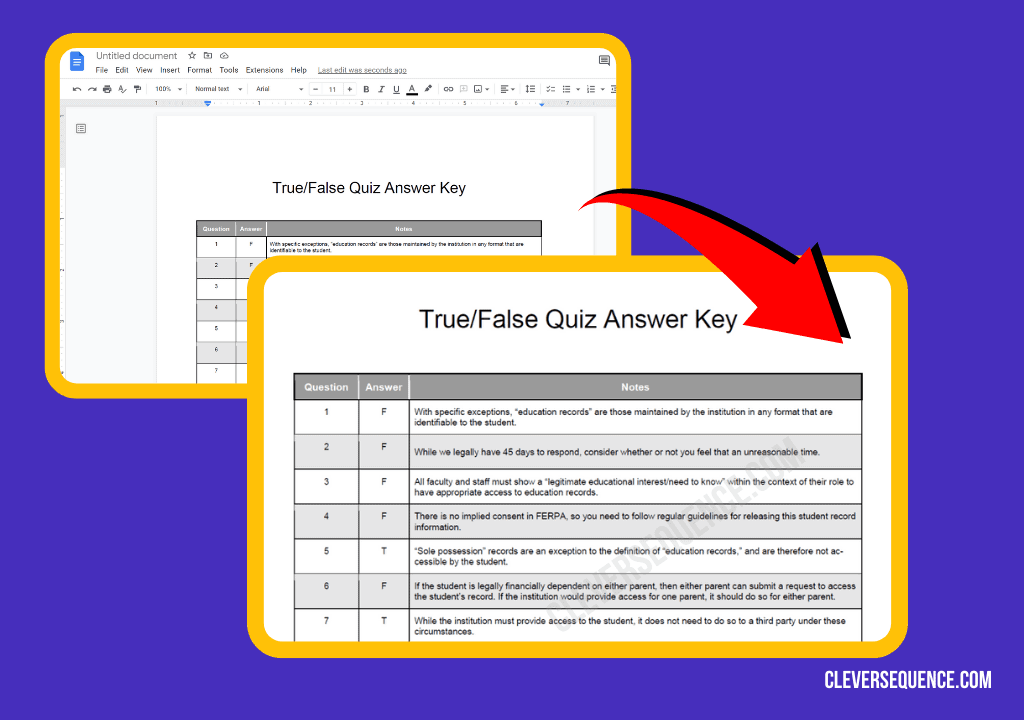 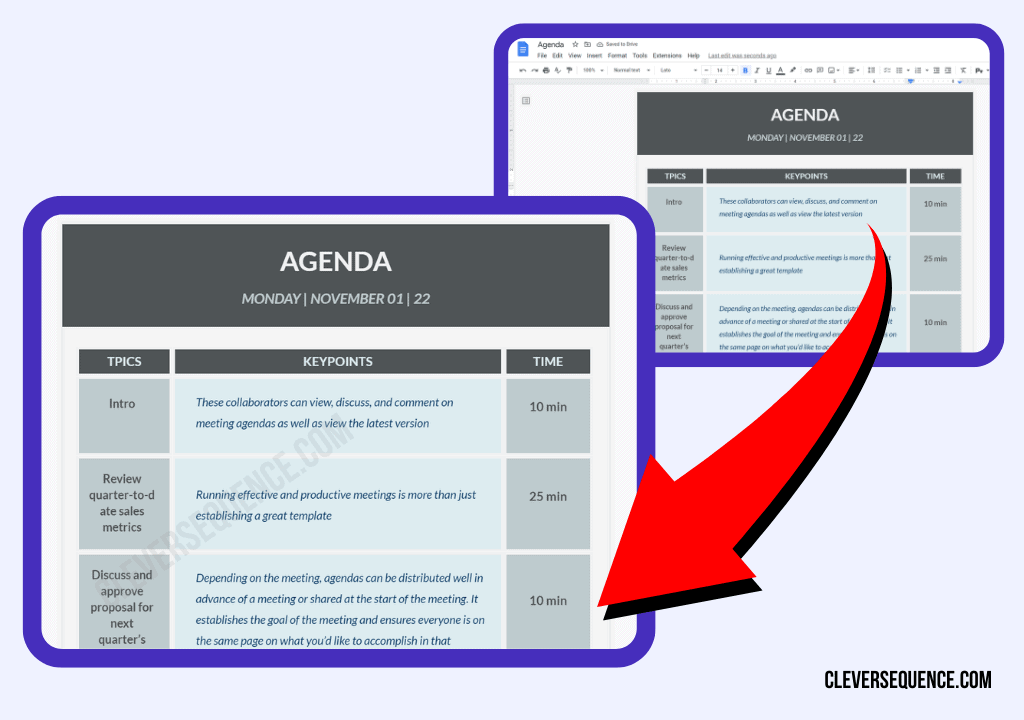 A Google Docs newspaper template is beneficial for your screenplay. You can use the “Newsletter Geometric,” “Newsletter Lively,” or “Newspaper Plum” options as a play script template for Google Docs.

These templates come with pre-made layouts, columns, and fonts. You can adjust the margins and font styles to your needs for your script.

Google Docs technically does not have a quiz template either. You can link your Google Forms survey to your screenplay.

Fill in the answers to the quiz to ensure you get all the information you need. When you finish, you can share the document with any collaborators.

The Agenda template is the final option you can incorporate into your Google Doc script template. This option works to build your branding into your screenplay.

An Agenda Template is perfect for a play script template Google Docs as it allows your whole team to collaborate. You can also define the purpose of your screenplay.

You can use several add-ons on a blank document to start your screenwriting in Google Docs. These options help to keep your screenplay organized and cohesive.

Screenplay Formatter Google Docs is a tool that helps you organize your document in a way that follows script standards. It will automatically adjust the indents and dialogues with one-press buttons. You can find this tool in the Google Workspace Marketplace.

There are also buttons to help you switch between scenes and action lines, and there are included transitions. The app continually checks your information to know if you are in the middle of something new. Additional features of Screenplay Formatter Google Docs are in the below list. 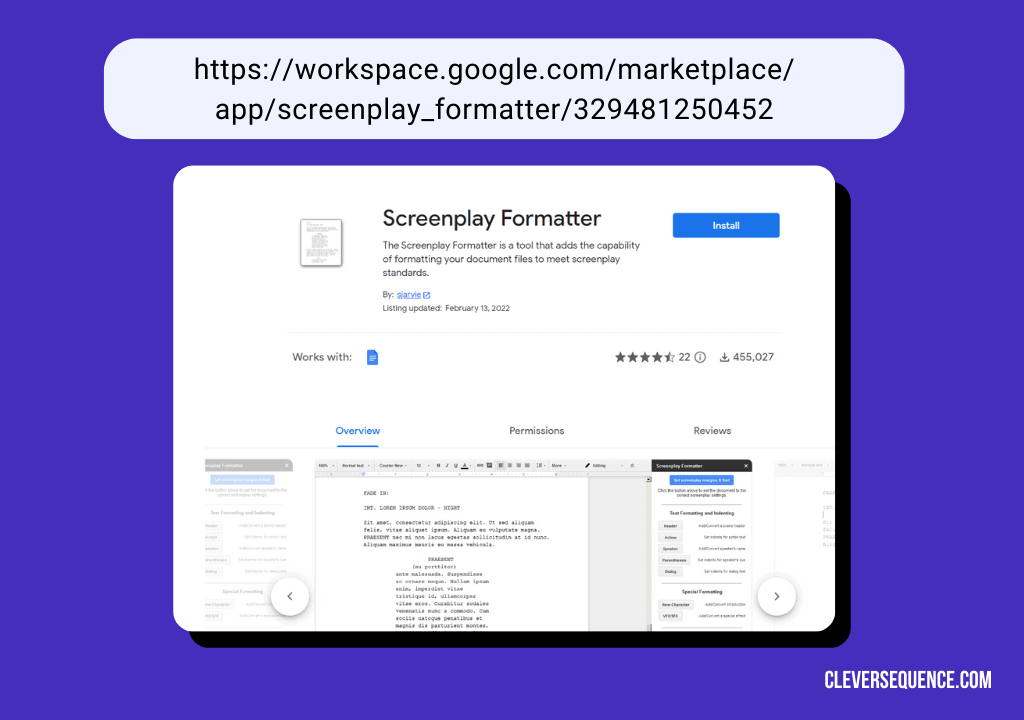 Fountainize is another tool available in the Google Workspace Marketplace. It allows you to draft a screenwriting template in Google Docs with ease.

When you use Fountainize, you can write text in a typical manner, converting it to a script later. You only have to press one button to make the transition.

Fountainize automatically determines the parts of your text associated with characters, dialogues, action lines, and other script elements. There are specific rules you should follow, as shown below. 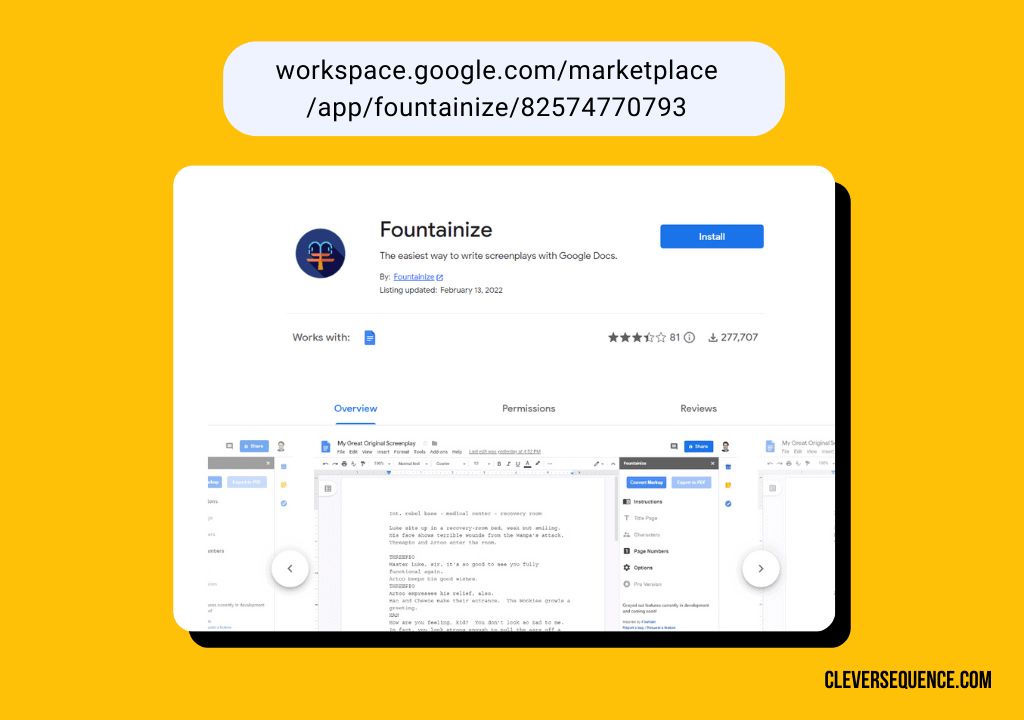 Write a Script on Google Docs

You should feel comfortable knowing how to write a script on Google Docs. You have to format your document to meet screenplay requirements.

Your font should be in Courier and should be size 12. You need specific elements in the middle of the document, including the dialogue and titles. You need 1.5-inch margins on the left, and all others should be one inch.

If you need assistance building your screenplay on Google Docs, you can use an add-on template. Consider Screenplay Formatter for Google Docs or Fountainize to make your scripts with ease.

The above article may contain affiliate links, which help support Clever Sequence

Information Technology Resources
How to Attach an Email to Another Email in Outlook
How to Insert Audio Into PowerPoint
How to Download Multiple Emails From Gmail
How to Draw on an Image in Google Docs
How to Print Labels From Google Sheets
How to Lock Rows in Google Sheets for Sorting
How to Create an Email Newsletter in Word
How to Write a Script on Google Docs
How to Link Two Cells in Excel
How to Double Space on the Google Docs App
Smartphone Tips
How to Set Up Google Account on Iphone
How to Scan QR Code From Camera Roll
Transcribe Voice Memos to Text
How to Find Gmail Password on iPhone
How to Timestamp Photos on iPhone
How to Make a Three Way Call on Android
How to Improve Video Quality on iPhone
How to Pixelate an Image on iPhone
How to Find Purchase Date of iPhone
How to Make a File Smaller on iPhone
Social Media
How to Block Hashtags on Instagram
How to Share an Instagram Account With Someone
How to Request Admin Access on Facebook Page
How to Reduce Price on Facebook Marketplace
How to Remove Yourself From Facebook Page Admin
How to Overlay Photos on Instagram Story
How to Add Videos From Camera Roll to Tiktok
How to Make a Collage on Facebook Cover Photo
How to Make a Meme With Your Own Picture
How to Make Infographics for Instagram
Productivity & Organization
How to Organize Your Ideas in Writing
How to Merge Google Calendars From Different Accounts
How to Highlight Text in Canva
Create Paypal Shipping Label Without Purchase
How to Stop Getting Emails From Someone
How to save an online article as a PDF? Step by Step Tutorial
How to Block Certain Websites on Chrome (Step-by-step)
How to Write a Book With No Experience
How to Make a Video File Smaller on Mac
How to Transfer Money From Visa Gift Card to Cash App
Business Ideas
How to Announce a New Business on Social Media
How to Make a Book Into an Audiobook
How to Do Stand Up Comedy for the First Time
How to Get Into the Film Industry With No Experience
How to Transfer Money From Chime to Bank Account
How to Calculate Freight Cost Per Item
How to Be a Dog Walker on Wag
How to Cancel Offer on Mercari
How to Prepare Annual Budget for a Company
How to Sell Liquidation Items
Software & Apps
How to Get EPP Code From Google Domains
Can You Add Music to Canva Video
How to Change the Color of a Logo Without Photoshop
2 Options to Make a Multilingual WordPress Site
How to Erase Part of an Image in Canva
2 Tactics to Optimize CSS Delivery in WordPress
How to Indent in WordPress
How Much Should I Charge to Build a Wix Website
How to Cancel My Canva Subscription
Case Study on Biomimicry in UX
Shopping
Amazon Closed My Account for Returns
Best Seat Cushions for Buttock Pain
Where is My Digital Code Amazon
Change Payment Method Amazon After Order
How to Know if a Shopping Website is Legit
75 Best Gifts for Instagrammers
Amazon Pay Withdraw Funds
How to Cancel Walmart Plus Free Trial
21 Most Comfortable Office Chairs For Long Hours
61 Tools for Guys Who Have Everything
Our Guides
Clever Sequence® 2017 - 2022 © All Rights Reserved.